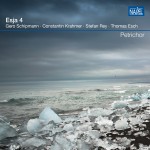 Gero Schipmann, guitarist from Cologne, has been inspired to write the music for this album by a twelve-month stay in Iceland. Petrichor is not simply a sampler which sets out to paint a musical portrait of Europe’s remote north, but rather than a mere collage of reconstructed nordic sirens, folk airs and ethereal „Lord of the Rings“ film music, we hear open-sided jazz from a quartet head up by a guitar which exhibits neither technical prowess for its own sake nor tediously melancholic nebulosity.
Following his graduation in music in Cologne, Gero is now based in London, where he is completing a masters degree at the Guildhall School of Music and Drama.

This entry was posted in Musicians, New Releases, Reviews. Bookmark the permalink.